It was an honour to fit Northampton Saints’ David Ribbans with an iWALK 2.0 yesterday. The combination of an ankle and a wrist injury made using conventional crutches tricky for him but the iWALK solves that problem.

He has it set slightly low for learning but there is still some height adjustment left for when he becomes more expert on it. He’s working with club physio, Joe Booth to make sure he gets the best from his new mobility option while being able to carry on training

I had the pleasure of visiting Craig Charles today at the Mostly Jazz festival in Moseley, Birmingham and fitting him with an iWALK 2.0, which to took to like an expert. He is now introducing acts on the stage wearing it! Here he is with Hammond legend, Brian Auger. 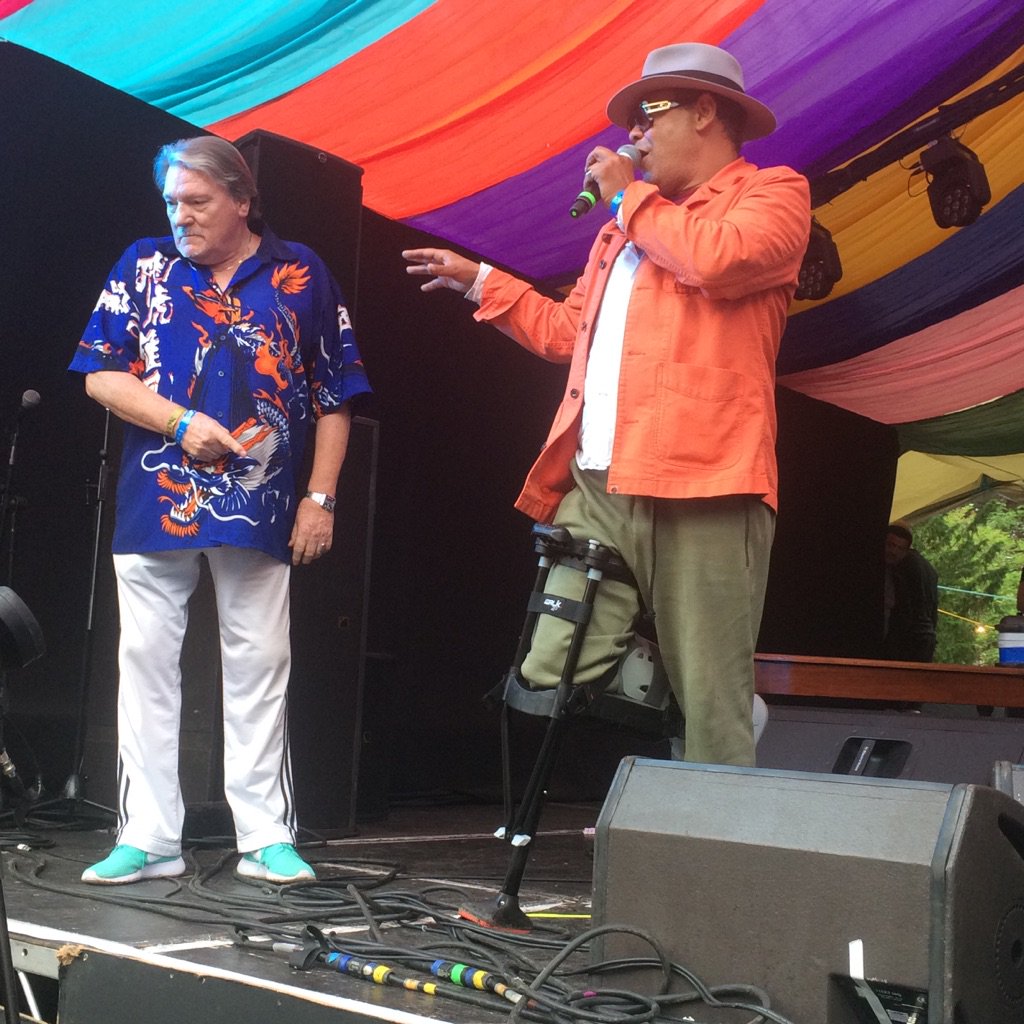 I see that he is said to have broken his ankle in the plane crash on the golf course – at least he probably still has an iWALK 2.0 and knows how to use it!

It was very kind of Fleet Street Fox (Susie Boniface) to give the iWalk 2.0 an inadvertent plug in the Daily Mirror in her piece based on the hype about the new Star Wars, in which they kindly used a couple of pictures of Harrison Ford (what, him again?) on his iWalk 2.0 back in the summer. She mentioned a figure of $127 million for “special effects, JJ Abrams’ fee and Harrison Ford’s ankle” but I am delighted to report that, of that figure, Mr Ford’s iWalk 2.0 was only £150 worth!

If you hate your crutches and need the use of your hands (Harrison didn’t actually need to hang on to the handle like he was doing in those pictures) it’s a bargain worthy of the Black Friday phenomenon that she was moaning about but available all year round from us.

I had a fascinating visit yesterday to Farleigh House, Bath Rugby’s training ground. It’s a stunning place for them to work and the physios and medics I met really seemed to like the iWALK 2.0. Even a 6ft 7in, 124kg second row forward can use the device as its strength and range of adjustment means it will do the job. More stories later once we get reports from the player who will actually be using it for real. Thanks to (uninjured) Will Spencer for acting as the guinea pig while the medical team saw what the iWALK 2.0 can do to help a player who is temporarily non weight-bearing.

An interesting article about the history and design of the iWALK 2.0 in Plastics Today

Our next delivery is now in UK Customs, so hope to have stock in a few days

Our second delivery has now arrived and we have plenty of stock of the new iWALK 2.0 for sale at £149.95.

The first consignment of the new iWALK 2.0 arrived in the UK last week and are selling fast. More are on their way but only a few left in stock at £149.95 + carriage at cost.

Our first delivery of the iWALKFree 2.0 has landed in the UK and been released by customs, which means we should have them for sale late next week. If you want to pre-order one just drop us an email and we’ll send you a Paypal invoice. Price is £149.95 plus £16.14 for next-day delivery to most of mainland UK. If you are in somewhere like the Isle of Wight, Highlands and Islands, Northern Ireland or Isle of Man we can quote you for delivery, which we pass on at cost.